With a strong, negatively-tilted trough entering the Plains following several days of warm southerly flow at the surface, the deciding factor for this setup would be the same as it almost always is for fall chases: instability. Despite the long period of return flow, low-level ridging in the eastern U.S. meant only modified Gulf moisture was available, so dew points would be hard-pressed to exceed 60 deg F. Even the upper 50s that verified are not too shabby by November standards; yet, to counteract the seasonably warm mid-levels, we ultimately needed a bit more.

Between school and the Election 2008 madness, I paid quite a bit less attention to this setup than I normally would. Then again, it never looked incredibly promising - at least anywhere near Norman - until we were inside of 24 hours. The timing of the trough seemed less than ideal, with the 500 mb low already forecast into western NE by 00z, and 850 mb winds veering substantially across most of the warm sector. Even surface winds were shown to veer a bit during the afternoon on model runs from a couple days out. The SPC put out a SLGT with 5% tornado probabilities the night before, but this was upgraded substantially to 10% hatched on the 1300 UTC outlook, with the 12z RUC hinting at afternoon secondary cyclogenesis near the cold front-dryline intersection in KS - meaning an opportunity for more backed low-level winds. To my shock, I woke up not only to that, but an MD indicating the forthcoming additional upgrade to MDT and 15% hatched tornado probabilities at 1630 UTC.

Brandon, Bryan, and I left just before noon and headed north on I-35 with a general target in the vicinity of Ponca City. The idea was to get ahead of the area of initiation, since any supercells would be hauling northeast at 40-50 kts. On the other hand, we didn't want to have to wait too long since a somewhat quick transition to linear mode was anticipated - nevermind the 5:45pm sunset. We stopped in Perry to grab lunch, and by the time we finished, it was nearly 2pm. The first echoes on radar quickly appeared down the dryline in Caddo Co., and the developing cell looked poised to track just to our south when it eventually crossed I-35 a couple hours later. We gradually meandered back south towards Guthrie, and by 3pm, convection along the dryline was becoming fairly abundant. Unfortunately, it was not a series of classic supercells, but rather small line segments with embedded "notches." Chalk it up to <1500 J/kg MLCAPE.

Still, the initial storm that had begun west of Anadarko looked to be about the best thing around, and it was quickly approaching the NW suburbs of OKC. We exited I-35 at Guthrie, hoping to get a good view of the meso once we got west of town. Had we known the school zones were active and the lights in town let about 3 cars through at a time, we might not have tried that; needless to say, some stress and frustration followed. Fortunately, we didn't waste too much time before we were able to return to I-35 to continue south. The storm had taken a bit of a right turn and was aimed squarely at Edmond, at this point. On the drive down I-35 between Guthrie and Edmond, poor terrain and buildings made it impossible to see all the way to the ground below the storm base. We got fairly excited when radar showed a sudden tightening of the meso that corresponded to what looked like a huge lowering to our SW, but it turned out to be a huge mess of outflow; any circulation was embedded within heavy precipitation behind it. This would be the theme of the day, really, as moisture and instability were just not supportive of classic supercells.

From I-35, we flew ENE on I-44 and exited at Warwick to take US-177 northbound. The meso - which, again, was spawned by a strung-out HP supercell at best, and short line segment at worst - seemed to be cycling very rapidly on radar, with only 1-2 scans between its more impressive showings on velocity. Visually, the picture remained about the same: very broad lowering to our west, and a massive area of precipitation behind it. We continued north to Perkins, at which point the storm was rapidly catching up to us from the WSW. Traffic in town prevented us from getting back ahead until we were already in the torrential rain, but after a few minutes of heading east on OK-33, we were in the clear again. We stopped briefly a few miles east of Perkins to watch the mildly photogenic HP structure approaching from the west, but it wasn't five minutes before we had to throw everything back in the car as outflow raced in. 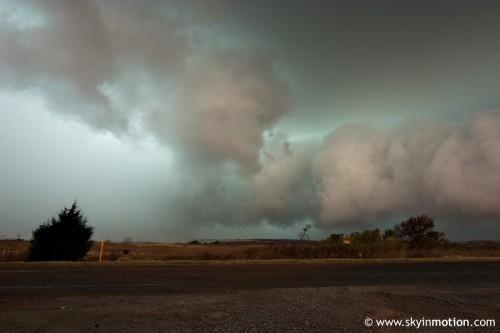 Before we could reach the next southbound highway, the most intense portion of the storm was upon us. For a few minutes, we were battered by a barrage of small to moderate-size hail, until we could drop down OK-18 towards Chandler. After clearing the southern edge of the precipitation associated with the storm we had been following all afternoon, we had had about enough. From north of Bartlesville all the way down to Wichita Falls, the dryline had been spitting off HP supercells and line segments for a few hours now; yet nothing looked like it could come close to getting the job done tornadically. In fact, OUN would not issue a single Tornado Warning all day. The formidable T/Td spreads and less-than-ideal low-level wind field had won out.

We headed for home, with sunset already fast approaching at 5pm. Along the way, we encountered additional dryline supercells that produced small hail, including one in Moore that dropped sporadic pennies to nickels ahead of the main precipitation core. And, wouldn't you know it, these later storms actually looked much better structurally than anything we'd seen during daylight. We got home around 6:30pm, and though the dryline (with the cold front catching up by now) continued to pump out convection along the I-35 corridor all evening, I was way too tired and lazy to go out for lightning pics. I think it's pretty safe to say the 2008 chase season has come to a close, so now it's time to see whether our desperation gets to us enough that we try out another Mississippi Valley setup this winter.